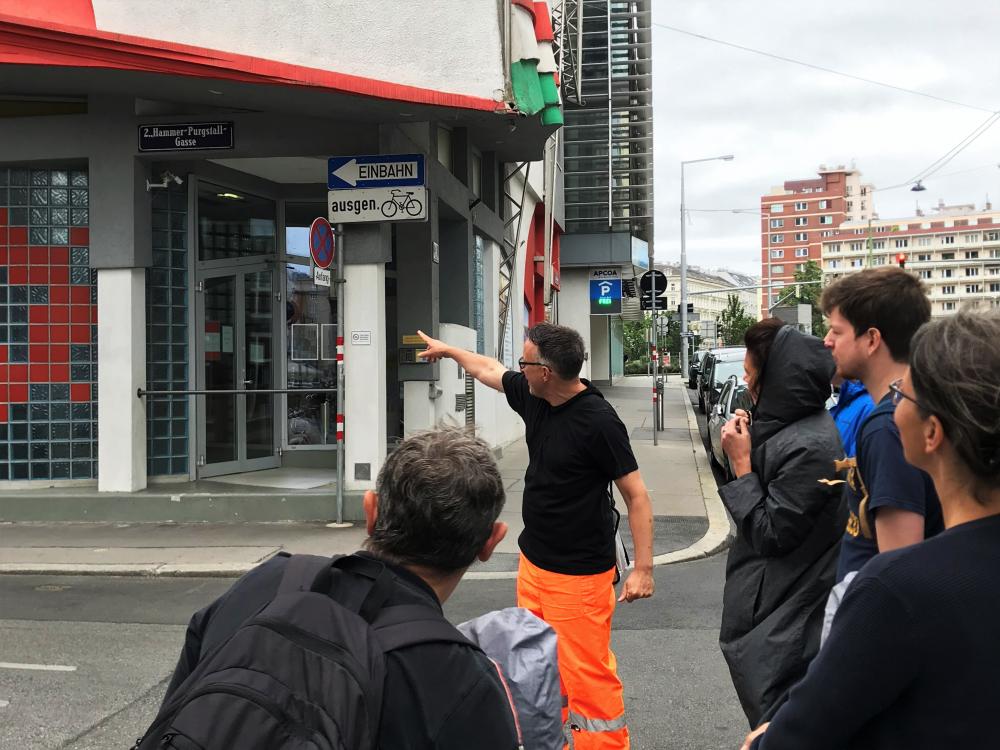 Vienna is a beautiful city – that isn’t up for discussion. Beauty, however, can quickly become boring. Ugliness always remains interesting. That's why the Londoner Eugene Quinn shows the most questionable buildings of the 1st, 2. and 3. district on his walk. In addition to telling funny facts, he also wants to encourage discussions between the participants. Written by Anna Flaschberger

Before the walk starts, everyone gets a sticker on the back of their hand. If Eugene therefore encounters questioning faces, the Englishman answers: “The stickers are supposed to be ugly.” Instead of an umbrella or a flag, he wears orange trash pants to make it easier to follow him. He also hopes for rain so that the ugliness of the buildings increases. Right from the beginning one thing is clear: This is not going to be a conventional guided walk through Vienna.

Originally, Vienna Ugly was created for the Eurovision Song Contest in 2015. The walk was a reaction to “all the bad singing”, Eugene says. He has been doing the hikes to the ugliest Viennese buildings for two years now. All of them are held in English and focus on the bad architectural taste of rich people. They would have had the means to build a nice building but apparently decided not to. Thanks to their missing sense of design, this walk can take place.

A city walk past architectural sins

The first Vienna Ugly candidate won't be too long in coming: The Flakturm in Augarten. Although this building wasn’t financed by wealthy people, it was definitely misplaced in this beautiful park. Eugene talks about the National Socialist history of the tower and its current use, or more precisely, its non-use. The Englishman is very critical but presents facts in a humorous and funny way, so that listening to him is interesting.

We continue towards the Karmelitermarkt where fruit and vegetables as well as international specialities and regional products are sold. There are several questionable buildings here, waiting for an assessment. A house that carries all the ex-wives of the owner on its façade, as well as a bizarre roof extension of another building, for instance. Even public constructions aren’t spared from the walk. For example, Eugene shows the Federal Ministry of Innovation, Transport and Technology and the monument of Johann Strauss in the Stadtpark. After a total of eleven buildings and 2 ½ hours, the tour through Vienna has come to an end and our horizons have been broadened.

The "House of Time" (left) and the federal ministry for innovation, traffic and technology (right). © FT/Anna Flaschberger

An important part of Vienna Ugly is the participants’ judgement of each building. As the popular quotation suggests, beauty is in the eye of the beholder and therefore opinions often differ in this regard. Eugene himself takes these discussions very seriously and even adapts his excursion accordingly: “Buildings which don’t get enough votes aren’t ugly enough and so I take them off the walk”.

Provocation is part of the program

But it's not just about making fun of buildings. Social phenomena such as beauty and wealth are to be called into question. Doing this in a humorous way makes it a lot more interesting, of course. Eugene also takes on complaints from homeowners and fines. Vienna Ugly may officially not be called a "tour", only a "walk. " He has agreed on these and other rules with the Vienna Chamber of Commerce to be able to do the excursion in the future.

Anyone who lives in Vienna should definitely have been on this extraordinary city walk. However, Vienna Ugly is also suitable for tourists who want to get to know Vienna from a different angle.

For more information and dates: https://spaceandplace.at/vienna-ugly